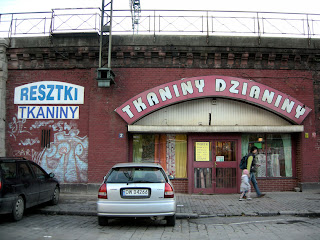 It is February 26th, 2010. Today is the birthday of two dear friends of mine and as I sit here and think of the passing of time, I realize that it has been four months to the day (almost...three days short) since the first day of QUILTED in Poland. And you don't even know what happened! So here I go, trying to backtrack a bit so as to get it all down. The blog must continue because...there are real chances of continuing QUILTED here in Birmingham, AL, which is where I currently am. I know, I know. There is a LOT to catch you up on. Hold on, here we go...
About two days before the first workshop, I went to the fabric store that had been suggested to me by the Institute's secretary. A very hip woman who makes all of her own clothes, I definitely trusted her opinion. Actually, before going to the fabric store by myself, Lloyd and I made the journey ourselves on a Sunday. Along the way, we met a very nice young man who talked to us about music, showed us footage he had taken on his cell phone the night before at an avante garde performance somewhere in Wroclaw and told us he was leaving for a year in India the following week. This young man ended up coming to a couple of the Open Program's performances before embarking on his Indian adventure. Lloyd and I also found a really delicious restaurant nestled under the raised train tracks before finding the fabric store. I can't remember exactly what he got, but I remember there was melted cheese involved and I had serious entree envy.
I digress. We found the fabric store and I made mental map directions so I could come back later in the week with some money in hand to purchase the necessary fabric for QUILTED. When I did return, I noted quickly that the small space was chock-full of beautiful fabric. The more I searched through the bolts, the more lovely things would pop out at me. I remember picking out this print that had a warm brown background. The print was a floral that was very stylized...something in between Hawaiian Sixties floral print for a wicker couch and well, something possibly more modern? Anyway, I thought, "this will be totally rejected, but I'm buying it anyway" - it was half off.
When I first walked in the store, I approached the nicer-looking of the two female employees and first asked if she spoke English. She sort of grimaced and said, "Yes?" so I kept it very simple. I handed her one of the flyers I had made seeking participants for the workshop and I told her I was going to be buying a lot of fabric. I picked out seven or eight basic solid colors, and though I didn't think about it at the time, I have learned now, just because there is the perfect leaf green, but it is a slippery silk, doesn't mean it's worth it for the color alone. The leaf green silk that I purchased was the most expensive fabric I bought AND the hardest to work with. There were some others that were also perfect color-wise, but have proved very difficult to stitch down with mere needle and thread and very minimal skills/patience!
After getting a base of solid colors, I had a field day picking out the patterns. The best part? They were marked way WAY down and I was able to buy a lot more fabric than I really needed. This turned out to be a great boon after returning to Italy...but again, I am getting ahead of myself. After an hour and a half in the store, I had spent approximately 50 euros and had a HUGE bag of fabric.
I walked back to the Rynek and met Lloyd at the cozy middle-ages looking cafe/bar that we had enjoyed spiced warm wine at earlier in the week. I was excited by the fabric acquisitions. The next step was NOTIONS (all the tools, materials associated with sewing that ARE'NT the fabric).
Posted by Lillis Taylor at 12:30 PM